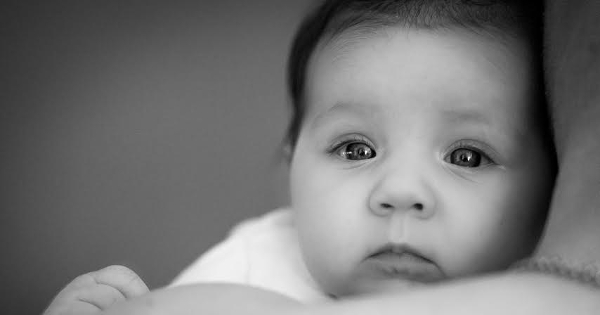 Children are far more vulnerable to the damaging effects of electromagnetic fields than we are. Your child’s brain absorbs two to three times as many EMFs as yours, and sources of exposure are everywhere. What can you do?

Is your child’s favorite pastime screen time? Are you concerned about how much cumulative exposure your kids have to electromagnetic radiation at home and at school from computers, cell phones, tablets, electronic toys, cell towers, power lines and the like?

If not, you should be!

Children are more vulnerable than adults to the effects of EMF (electromagnetic frequencies or fields) for a number of reasons, and most are submerged in an electrosmog soup all day, every day. What are the risks?

In 2016, the National Toxicology Program released the results from the largest cell phone study ever performed showing an undeniable association between nonionizing radiation and cancer. Rats exposed to the frequency of radiation emitted by cell phones developed two kinds of tumors: gliomas in the brain and schwannomas in the heart. These results align with several observational studies finding links to the same types of tumors in humans – plus acoustic neuromas and meningiomas.

You may have seen the news stories of late about cell towers near schools. A cancer cluster among young children at Weston Elementary School in Ripon, California, led to the shutdown and planned relocation of a Sprint cell tower.[i]

In 2016, one child from that school named Kyle Prime was diagnosed with kidney cancer. Five months later, his classmate Mason Ferrulli received a diagnosis of brain cancer. Two more kids and three teachers from Weston Elementary have received cancer diagnoses since 2016, along with two preschool-age children that live near the school, and a former student who was diagnosed with brain cancer at the age of 22.

Many Ripon parents believe the recent flurry of cancer cases was caused by radiation from radio frequency (RF) waves coming from a cell tower located right on the school grounds. Their vociferous concerns and the resulting media attention forced the shutdown of that cell tower, but how many other schools are silently situated in the shadow of DNA-twisting, cancer-smoldering cell towers across the USA?

Cell towers are only part of the problem. The amount of exposure from living near a cell phone tower is typically many times lower than the exposure from using a cell phone, and far more children are glued to their cell phones than live in the shadow of cell towers. According to the Pew Research Center, the vast majority of teens have a cell phone and 45 percent are online on a near continuous basis. They also report that 75 percent of preteens and early teens sleep all night with their cell phone under their pillow.[ii]

One study reportedly found that using a cellphone for just 20 minutes per day increased an individual’s brain tumor risk by 300 percent over the course of five years. But this is among adults… what about our children?

Years before kids ever lay hands on a cell phone, they are playing with MWR-emitting toys (microwave radiation). These wireless “toys” are literally radio transmitters. Concerns have been raised about the increased vulnerability of children to RF and MWR fields.

Kids face a greater risk than adults for bodily injury from all these wireless devices. Their developing nervous systems have greater susceptibility to damage as their brain tissue is more conductive and more absorbent, and their cranial bones thinner than those of adults. Children also look forward to longer cumulative exposure.[iii] [iv]

MWR is a Class 2B (possible) carcinogen – the same category as lead, DDT and chloroform. Children are at greater risk from exposure to carcinogens than adults, and the younger your child, the higher her risk. The following is research data about children and EMF absorption:

In 2011, MWR was classified as a Class 2B (possible) carcinogen – the same category as lead, DDT and chloroform. Children are at greater risk from exposure to carcinogens than adults. The younger your child, the higher her risk.

Health risks from EMFs are not limited to cancer. EMFs have been linked to infertility, DNA damage, autoimmune issues, reduced tissue repair[viii], neurological dysfunction, cognitive problems, emotional and behavioral issues, fatigue, cataracts, macular degeneration, and more. Children are more vulnerable to the cognitive, behavioral, and emotional effects of EMFs. ADHD, anxiety, and behavioral problems are on the rise. According to CDC, 9.4 percent of children aged 2-17 years have received an ADHD diagnosis, and 7.1 percent have been diagnosed with anxiety.[ix]

Studies show how “digital addiction” leads to structural and function changes in the brain that involve emotional processing, executive attention, decision making, and cognitive control.[x] Even teens themselves report feeling these effects! According to the Pew poll, without their cell phones 56 percent of teens report at least one of these three emotions: loneliness, feeling upset or feeling anxious.

A two-minute call can alter brain function in a child for an hour, which is why other countries ban their sale or discourage their use under the age of 18. Children born to mothers who used a cell phone just two or three times a day during pregnancy showed a dramatic increase in hyperactivity and other behavioral and emotional problems. And for the 30 percent of children who had also used a cell phone by age 7, the incidence of behavioral problems was 80 percent higher!”

It does not help that governmental/industrial regulations have not been updated for twenty years. According to David Carpenter, MD, Director of the Institute for Health and the Environment, School of Public Health at the University of Albany, and Co-Editor of The Bioinitiative Report:11[xii]

Unfortunately, all of our exposure standards are based on the false assumption that there are no hazardous effects at intensities that do not cause tissue heating. Based on the existing science, many public health experts believe it is possible we will face an epidemic of cancers in the future resulting from uncontrolled use of cell phones and increased population exposure to Wi-Fi and other wireless devices.

Thus, it is important that all of us, and especially children, restrict our use of cell phones, limit exposure to background levels of Wi-Fi, and that government and industry discover ways in which to allow use of wireless devices without such elevated risk of serious disease. We need to educate decision-makers that ‘business as usual’ is unacceptable. The importance of this public health issue cannot be underestimated.”

What Can We Do?

First and foremost, we can unplug our children, limit their screen time, and give them some digital detox. We can send them outside to play. Like the parents from Ripon, we can speak out about cell towers on school campuses. We can make our voices heard about the potentially devastating risks of 5G, the next generation of wireless technology with monumentally alarming risks to people and the planet.[xiii] Say no to Wi-Fi baby monitors – they’re just not worth it.

We can lower our exposure to EMFs, but we cannot eliminate them – reducing exposure is the ONLY surefire way to minimize the danger for ourselves and our children.

To deal with the unavoidable, we need as many tools in our tool bag as possible – and shungite is my personal favorite. Shungite is a rare natural mineral from Russia shown to transform manmade EMFs into more biologically compatible frequencies. Shungite Queen has a line of shungite items specifically designed for children.

The average latency time between first exposure and diagnosis of a tumor can be decades – tumors induced in children may not be diagnosed until well into adulthood. What you do for them today could have profound effects tomorrow, so the time to protect them is now. 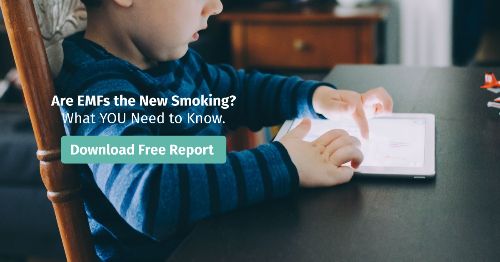 An increasing amount of doctors and scientists are calling EMF radiation “the new smoking”. Should you be worried? Consider these 3 facts:

We can’t put our heads in the sand anymore. Learn how 5G and other sources of EMF radiation really impact your health inside this 100% FREE guide. Download Now

For additional research on the potential health risks posed by electromagnetic fields, visit the GreenMedInfo database on the subject. 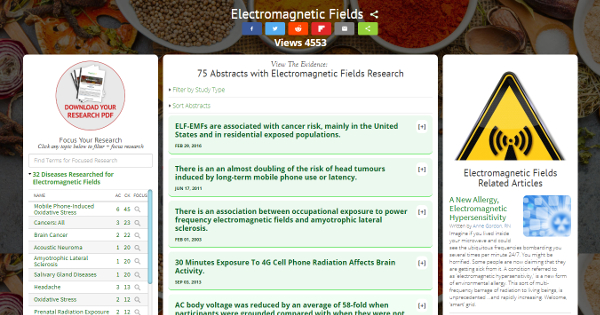 Valerie Burke, MSN is a freelance health writer in Olympia, Washington, with backgrounds in both allopathic and integrative medicine and a master’s degree in nursing science. Her areas of interest include nutrition, energy psychology, EMF protection, and integrating principles of holistic health to create balance in mind, body and spirit. You can learn more about her at www.shungitequeen.com