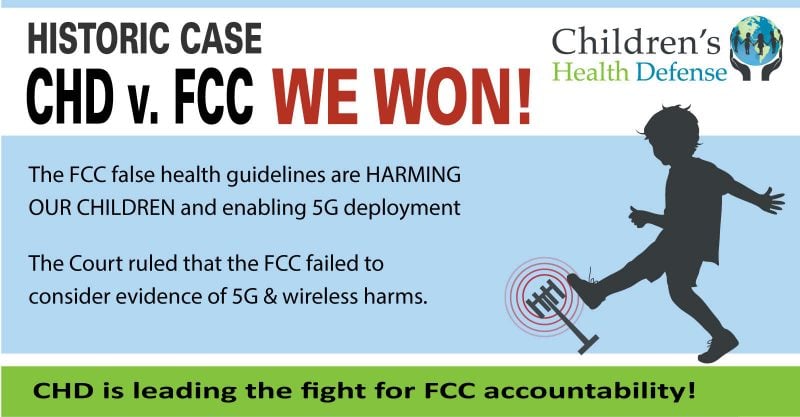 WHERE: By Zoom, Register Here

WHAT: The Children’s Health Defense (CHD) won its historic case against the Federal Communications Commission (FCC) for the agency’s decision not to review its health and safety guidelines for wireless-based technologies, including 5G. On Friday, Aug. 13 , the U.S. Court of Appeals for the DC Circuit published its decision, ruling that the FCC failed to consider the non-cancer evidence regarding adverse health effects of wireless technology when it decided that its 1996 radiofrequency (RF) emission guidelines protect the public’s health.

CHD filed the case on February 2, 2020, shortly after the FCC closed the docket it had opened in 2013 seeking public comment on its health guidelines for wireless technologies, which had not been updated in over two decades.  Despite thousands of comments and scientific evidence submitted by scientists, doctors and medical organizations, and statements by those who have been injured by RF radiation attesting to the need for stricter guidelines, on Dec. 4, 2019 the FCC published its decision affirming the adequacy of its guidelines without proper assessment of the comments or the evidence.

The case brought by CHD (consolidated with another similar suit brought by the Environmental Health Trust) claimed that the FCC lacked reasoned decision making and that its refusal to address the evidence was arbitrary and capricious. In a 2-to-1 ruling, the Court agreed, citing numerous instances of the Commission’s arbitrary and capricious failures to respond, including to evidence that exposure to RF radiation at levels below current limits may cause negative health effects; the inadequacy of testing procedures particularly related to children, to long-term exposure to RF radiation,to pulsed and modulated RF radiation; and the implications of technological developments that have occurred since 1996. The court also noted the agency’s complete failure to respond to comments about environmental harms.

Those who submitted affidavits in the case will also participate in the press conference and speak to what this historic win means for them.

All speakers are available for an interview upon request.

Children’s Health Defense is devoted to the health of people and our planet. Our mission is to end the childhood health epidemics by working aggressively to eliminate harmful exposures, hold those responsible accountable, and establish safeguards so this never happens again.

Sign up for free news and updates from Robert F. Kennedy, Jr. and the Children’s Health Defense. CHD is implementing many strategies, including legal, in an effort to defend the health of our children and obtain justice for those already injured. Your support is essential to CHD’s successful mission.